Susanne Fusso is a deeply devoted teacher. For over thirty years she has trained and inspired generations of students at Wesleyan University, many of them returning again and again to her courses and then going on to write theses with her. Her commitment to the material she teaches is palpable and she prepares meticulously for each course, paying close attention to details even as she conveys the essence of each work. Susanne’s courses do not only teach Russian literature and culture, but also how to be a good reader and writer. She is committed to her students’ learning, dedicating countless hours to working with students outside of class on these invaluable skills. In addition to her brilliance as a teacher, Susanne also stands out as a powerful mentor, especially for her thesis students. Beyond the weekly meetings and reading of countless drafts of chapters, she provides life guidance and inspiration that have transformed numerous lives.

Susanne has attracted the best and the brightest to Wesleyan’s Russian program and has an incredible track record of her students going on to top PhD programs and then becoming professors. Many cite her as their inspiration for this chosen path. In the words of one: “Her love of literature and culture comes out in everything she teaches, even if she’s taught it a million times. I am so lucky to have met her and I probably would not be a liberal arts teacher today, following in her footsteps, if I hadn’t.” Through her teaching, Susanne has left her imprint on the next generation of scholars and helped ensure the continued strength of our field. We are honored to be able to recognize her with this award. 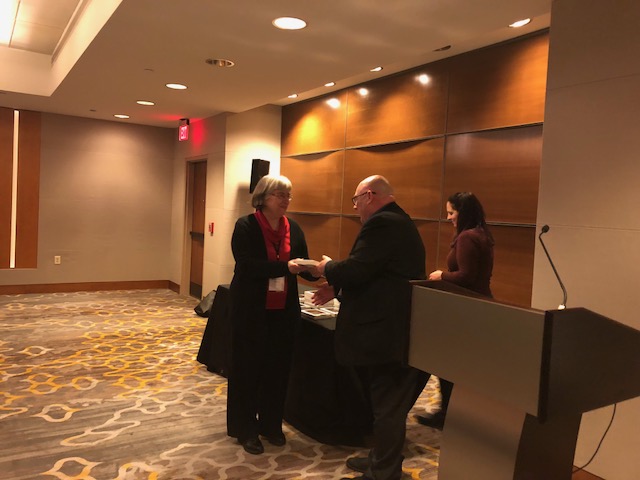 Dr. Mara Sukholutskaya, Associate Professor at East Central University in Ada, Oklahoma, received her doctorate from Linguistics University in Kiev, where she was a teacher of English when she immigrated to the US in 1991—as the Soviet Union was collapsing. She found her educational niche at ECU, where she has been teaching Russian for more than 25 years. At first, Mara taught Russian along with French and Spanish, as there was no formal program in Russian studies at ECU. Her early enthusiasm for developing Russian at ECU earned her the first George Platt Award in 1998 based on her dedication to teaching and to promoting Russian studies and on leadership in teaching the Russian language in Oklahoma.

In the years following, Mara continued to develop the Russian language and culture studies in the region when she established and directed a Russian Studies minor and created a program in Global Studies at ECU. She also was a founder of CARTA, the Central Association of Russian Teachers of America, and has served as the organization’s president for the last ten years. Committed to bring Russian language and culture to students in Oklahoma, she brought educators and presenters to Ada to share their expertise and perspectives with her classes. She joined the ACTR Board of Directors in 2002 when CARTA became an institutional member of ACTR, and has remained an active representative on the board ever since.

In 2016 Mara was awarded the prestigious “Excellence in the Teaching of Russian Language Award” at the recent CARTA Conference in Kansas City, Mo. And, last year, Mara was again recognized for her Russian language instruction with the Excellence in Classroom Teaching Award (Post-Secondary), at the Southwest Conference on Language Teaching at the Skirvin Hotel in Oklahoma City. The recipient of the award goes to an educator who teaches languages other than English and has contributed significantly to the teaching of second languages and to the profession. The instructor’s impact of the contribution must be significant in terms of the influence the individual has made on student learning. Mara has certainly made a significant impact on her students in Oklahoma, and we are delighted to honor her with this award. 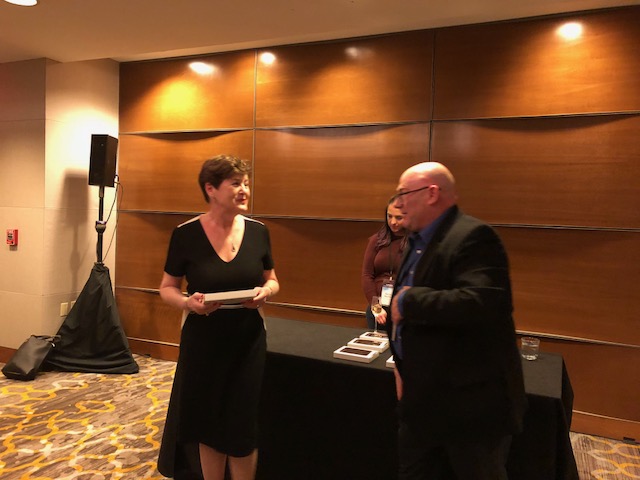 Susan has been a tireless supporter of AATSEEL for many years. She has served the organization in many capacities, most recently as one of the Vice-Presidents (2016-18). Susan has also served on the Publications Committee and the Professional Development Committee and reviewed abstracts for the conference in pedagogy and Czech studies since 1998. Perhaps her greatest contribution, however, has been as a tireless promoter of Less Commonly Taught Languages (LCTLs). The annual poster session that she first organized in 2011 has been a tremendous success that continues to gain momentum each year. Susan’s outreach to LCTL instructors has propelled that session into one that, last year, included over 20 presenters. Through her work, she has helped to attract presenters who might not otherwise have come to the conference and to provide a platform for the exchange of instructional and methodological ideas. Her work has significantly contributed to AATSEEL’s mission as well as to the promotion of the profession itself and we are delighted to honor her with this award. 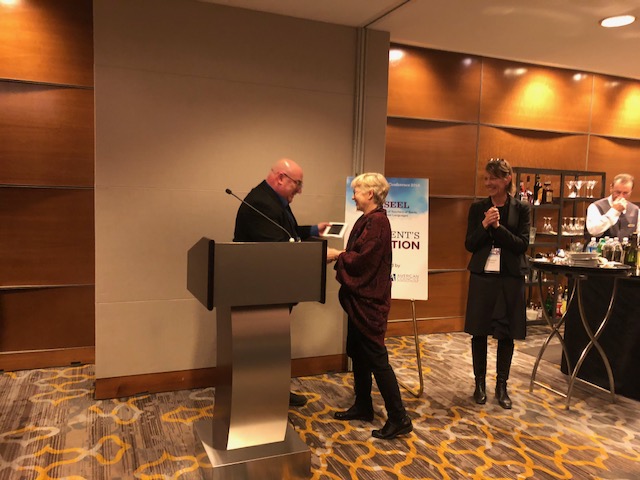 Michele Whaley received her BA degree in Slavic Languages and Literature at the University of Washington, and her MA in Early Childhood Education at the University of Alaska, Anchorage. She has been teaching Russian for more than thirty years in the Anchorage School District in Alaska. In 2016, Michele received national recognition when the Pacific NW Council for Languages named her as their nominee—one of five from the region—for the American Council for the Teaching of Languages (ACTFL) Teacher of the Year award.

In a recent interview, Michele responded to a question regarding what it was that she loved most about teaching language: “One of the rewards is when a student recognizes achievement in acquisition. With a comprehensible input approach, students often do not appreciate how much they are learning, because while the required attention and focus is rigorous, they are acquiring language unconsciously and it takes time to recognize their growth. When they suddenly realize the satisfaction that comes from true acquisition, it’s wonderful. Even a solemn high school student or an adult learner in a parent Russian class returns to the state of a young learner: proud, enthusiastic, and excited for more.”

Since 2012 Michele has been an active member of the Board of Directors of the American Council of Teachers of Russian, working tirelessly on various committees, including the ACTR Olympiada of Spoken Russian and the Russian Essay Committee. Her contributions to the ACTR Board are indicative of the commitment and passion that she has for the Russian teaching profession and for her students. Michele’s current position in the Anchorage School District is at the King Career Center, where she is working with preschool instruction. We are delighted to present her with this award. 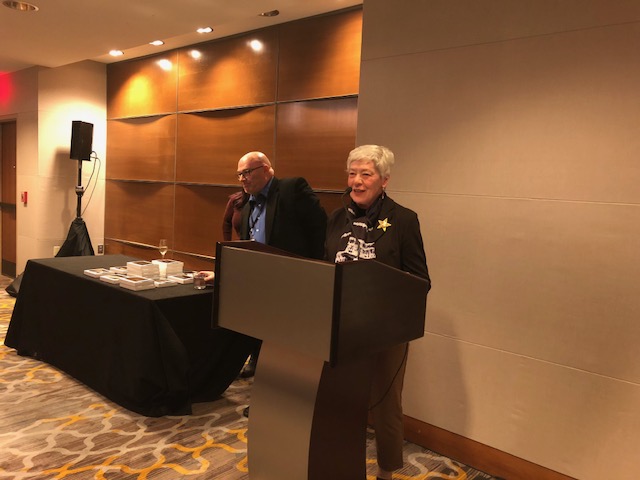 Jane Shuffelton accepting the prize on behalf of Michele Whaley.

Outstanding Contribution to the Profession 2017

Since the start of her career, Jane Hacking has devoted immense energy to institutions and communities in the field of second-language learning at the University of Utah, as well as at the national and international levels. At the University of Utah, where she is Associate Professor of World Languages and Cultures, she has served multiple terms as Co-Chair of the Department of Languages and Literatures, as supervisor of Fulbright teaching assistants and member of review committees for outgoing Fulbright applicants, as well as in many other administrative roles. She has also spearheaded a large number of successful grant applications of significant scale that have allowed Utah to grow programs for its students and to contribute significantly to national Flagship Program teacher training, STARTALK teacher training, and other important initiatives. In AATSEEL she has served in the Program Committee and as Vice President (for linguistics). In ADFL she has served in and chaired the Executive Committee. Across these organizations she has contributed to professional development initiatives ranging from seminars for graduate students on the job market, to Flagship Program teacher training activities, to development programs for new department chairs, to programs on funding sources for department chairs. Additionally, she has devoted considerable effort in the area of pipeline development at the K-12 level as a consultant in the organization of the Russian Dual Immersion initiative in Utah and as an instructional consultant and trainer for the STARTALK Russian Program. Of course, at all times she has been a dedicated teacher and mentor of students and graduate students, organizer of academic conferences, and participant in multiple research communities as a scholar, editor, and member of editorial boards. For her tireless devotion to the profession, we are proud to count Jane Hacking as a member of our association and recognize her with this award. 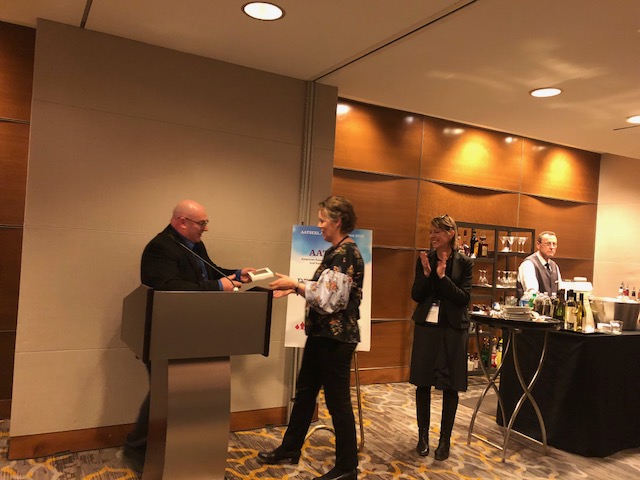 Yuri Leving, who is University Research Professor at Dalhousie University, is by any measure a leading light of scholarly research on Russian literature and culture. He is author of an astounding number of subtle, profound and deeply researched publications published in the leading journals and presses of our profession. His scholarly interests are broad and continuously in motion. A main anchor among his four single-authored monographs and many co-authored, edited and co-edited volumes is his groundbreaking work on Nabokov, which both teases out the interpretative intricacies of this consummately intricate stylist and inscribes him in broader contexts of literary culture— beginning with Leving’s first book, Train Station–Garage–Hangar (Vladimir Nabokov and Poetics of Russian Urbanism), which was short-listed for the Andrey Bely Prize in 2004, and taking off from there in multiple directions. Leving was the founding editor of the Nabokov Online Journal, which after a decade has close to a thousand subscribers and has published many highly significant peer-review articles. He has edited multiple almanacs, volumes of essays, and collections of Nabokoviana. And he has complemented his scholarly activity with curation of Nabokov exhibitions and a beautiful, yet provocative and critically acute, volume on the art and design of editions of Lolita (co-edited with John Bertram) that reached the broadest possible audience. Yet Leving’s work has extended far beyond Nabokov, to studies of diverse authors and topics in cultural history that range from studies of book production, canon formation and children’s books, to work on visual culture, cinema and digital culture. Soon, his fifth monograph, on Joseph Brodsky in Rome, is due to appear (if it has not already as I pronounce this citation), and will undoubtedly prove transformative for our understanding of that poet. Additional highly significant projects will surely follow in Leving’s ever-expanding sphere of interests and expertise. For his boundless energy and curiosity, extraordinary scholarly and writerly talents, and skills and service to the research community as editor and organizer, we are proud to recognize Prof. Leving with this award. 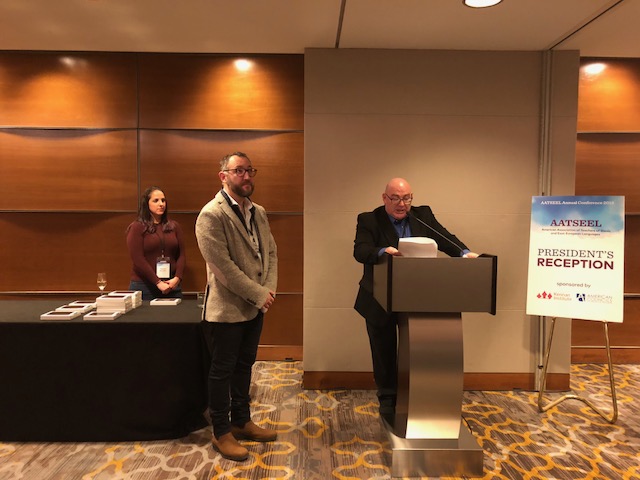