Katernya Ratushnyuk teaches Russian at the Staten Island Technical High School in a program that includes 1300 students. She has been the lead instructor for the STARTALK Discover Russian Summer Program, a joint project of the Fairfax County public schools and American Councils, for five years. She is now working as a curriculum facilitator on a new project to develop online learning modules for the Russian language. This work includes developing lesson plans, classroom activities, and teacher guides. Kateryna’s strengths include seamlessly integrating technology into language learning materials. She has delivered master classes in the STARTALK teacher training program and led professional development workshops for Russian teachers through American Councils. She also spearheaded a two-day curriculum workshop at the University of Arizona for a diverse group of Russian language instructors. Finally, she is the co-chair of the ACTR Russian Scholar Laureate Program and chair of the ACTR Olympiada of Spoken Russian in New York City. A tireless teacher and devoted promoter of the Russian language among youth, Kateryna is inspiring new generations to embrace Russian language learning as a love all their own.

Lynne Debenedette has been a tireless supporter of AATSEEL for over three decades. She has performed many roles for our organization over the years: she has been the Vice-President of the Pedagogy Division, she has served on the Executive Council, she has edited the conference program book, she has been on the selection committee for book prizes, she has served on the Committee for Testing and Professional Development, she has reviewed abstracts for the annual conference, and, as if this weren’t already enough, she has even managed the Facebook page! Lynne has attended the AATSEEL conference nearly every year for thirty years. She has organized a multitude of panels and roundtables on the teaching of language. Perhaps most importantly, she has served as a generous mentor for emerging scholars in the field.

Last year, Lynne won the AATSEEL award for Best Contribution to Language Pedagogy for Mezhdu nami, an innovative web-based textbook. The textbook not only makes online content available with one click—no downloads—but also captures the diversity of those who speak and study Russian. The textbook advances a task-based approach to language learning and can easily be used in flipped classrooms. Mezhdu nami’s embrace of contemporary language methodology reflects Lynne’s skill as an educator. She is a tireless teacher who overcomes the difficulties of learning Russian by making the language understandable and conquerable. Lynne is incredibly active—always attending panels, meeting with colleagues, and coordinating events. Yet this busy-ness does not compromise her high-quality mentorship and excellence in teaching; somehow, she manages to do it all and infect everyone with her enthusiasm at AATSEEL conferences and beyond. Lynne Debenedette’s dedication to the field, to the study of Russian, and to our organization is nearly unparalleled, and we are proud to recognize her with this award.

Alexander Zholkovsky—Alik to the many of us who know him well—has been a leading figure of research on Russian literature for over four decades. After an education and several publications in structural linguistics in the late 1960s in Moscow, he shifted his focus towards poetics and played an active role in the Moscow-Tartu school of semiotics, where he developed a “poetics of expressiveness,” devoted to description of the poetic worlds of particular authors, and published seminal articles on Pasternak, Pushkin, Tolstoy and others. In the late 1970s he organized the “Moscow Seminar in Poetics” that gathered together a veritable who’s who of leading lights of Russian literary and semiotic scholarship at his home in Moscow. After emigration, Alik taught and lectured at several European and American universities before arriving at USC in 1984. Since emigration, he has educated generations of American Slavicists and published on a dizzying number of topics, productively articulating many novel critical tools, including the “art of adaptation,” the poetics of “bad writing” (plokhopis'), and others. He has authored intricate explanations of intertextual appropriations, intersections and dialogues among twentieth-century authors such as Mandelstam, Pasternak, Bulgakov, Brodsky, Limonov, and between those authors and the nineteenth-century classics. More recently, he has written incisively on Akhmatova’s life-creation strategies as a sui generis obverse of Stalinism and on Zoshchenko’s writing as an expression of his existential anxieties, and he is currently at work on a large project devoted to the Russian tradition of “infinitive poetry.” Possessed of seemingly endless energy as an author, Zholkovsky has published broadly resonating memoirs and fiction in addition to his critical writings. It would be impossible to name each of Alik’s eighteen books (let alone to do justice to his over 200 scholarly articles) in a commendation such as this one, but we may mention his 1987 Poetics of Expressiveness: A Theory and Applications, co-authored with Iury Shcheglov, his Text Counter Text: Rereadings in Russian Literary History of 1995, or his more recent Poetika Borisa Pasternaka: Invarianty, struktury, interteksty. For his critical acumen, inventiveness, insight and extraordinary erudition, as well as his work as instructor, mentor and editor we are overjoyed to recognize Alexander Zholkovsky with this award.

Outstanding Contribution to the Profession

Since he was a graduate student at Columbia University, Serguei Oushakine has devoted an extraordinarily large portion of his copious professional energy to making scholarly connections, building intellectual community, and launching collaborations across disciplinary, linguistic and national lines of demarcation. Those in the room who, like me, predate Facebook will recall Serguei’s extensive email distribution list, including more than 1500 members, that for years was one the most important mechanisms for Russianists and Eurasianists for distributing information about conferences, publications from far corners of the scholarly and mass press, job advertisements and the like. Strikingly, while still in graduate school, Serguei edited three volumes of scholarly work on gender studies in Russia. Since taking up his position at Princeton, his activity as a convener of intellectual activity has increased with each passing year. He has been the editor or co-editor of no less than six edited collections on topics as varied as the intellectual legacies of Marxism and the history of Russian Formalism. He has edited or co-edited eight clusters of articles in leading scholarly journals on jocularity, nomadism, history and memory, and more. Paralleling and feeding into this work as editor, Serguei has convened numerous conferences and symposia—the most prominent among them, perhaps, making up the legendary Princeton Conjunction open-call conferences, which invariably initiate novel communities of scholarly contact around cutting-edge topics, from “Afterlives of Constructivism” to “Socialist Romanticism.” As with the participants in his conferences and his editorial work, so with his career as a whole, Serguei’s activities bridge continents and countries. He is as significant an intellectual force in Russia and Europe as in the US, and has participated in important transnational educational projects funded by the Open Society Institute, providing advanced educational opportunities for young scholars from across Eurasia, or contributing to revision of undergraduate programs in Anthropology in Central Asia. Serguei has done all this and more while also educating students and graduate students at Princeton and publishing an equally extensive body of his own original and innovative scholarly work—this too, graced with his trademark intellectual virtue of generative and generous dialogue across all manner of borders. A veritable engine of our common intellectual life, we are fortunate to count Serguei Oushakine as a member of our profession and proud to recognize him with this award. 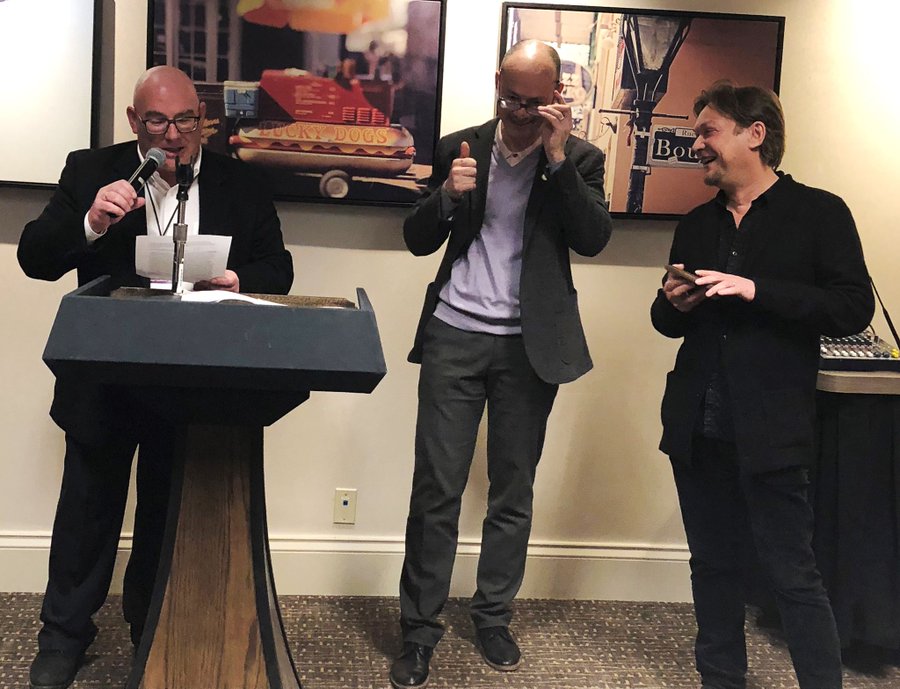 Judith Kalb has been teaching at the University of South Carolina since 1998. With her reconfiguration of the Russian program, enrollments in Russian courses have tripled. She established a thriving undergraduate major in Russian, now with 50 students, facilitated study abroad options and expanded scholarship opportunities, served as the faculty advisor to the Russian Club, and strengthened the connection between her department and the university as a whole through innovative course development.

Working with the South Carolina Honors College, she designed and has taught Russia-related courses specifically for honors students. Most recently, she developed a fully online literature course called “Values and Ethics in Literature,” which includes a set of weekly readings and video lectures centered around a specific literary text and corresponding value, such as justice, compassion or courage. This course, which satisfies two core university-wide requirements, has introduced Russian literature to a broad range of students. A huge success, this course led to her receiving the Garnet Apple Award for Teaching Innovation in 2017.

More broadly, Judith holds a remarkably long list of awards from the University of South Carolina in an impressive range of domains: multiple teaching awards, as well as awards for her own research, for faculty-mentored undergraduate research, and for advising. One of her former undergraduates who is now pursuing a Ph.D. in comparative literature noted that her influence has extended far beyond the classroom:"She has been a big influence on my life and general career path, how I teach, the way I approach things."

Despite wearing so many different hats, Judith has also found the time for research. In 2008 she published Russia’s Rome: Imperial Visions, Messianic Dreams, 1890-1940, in which she examined the image of ancient Rome in the writings of Russian modernists. She has also written numerous of articles and co-edited two volumes of the Dictionary of Literary Biography, on Russian Writers of the Silver Age and Russian Novelists in the Age of Tolstoy and Dostoevsky. She is currently working on a book-length study of Homer in Russian historical, political and cultural contexts.

For her remarkable success at creating a thriving Russian program at the University of South Carolina, her innovative course development, and her extraordinary talents as a teacher and scholar, we award Judith Kalb the 2019 Excellence in Teaching Award at the Post-Secondary Level.

With a PhD in Slavic Linguistics from the University of Pittsburgh, Annalisa Czeczulin has been teaching at Goucher College in Maryland since 2003. Her courses include all levels of Russian, linguistics and translation, and Russian culture courses that involve innovative community-based components. In her research, she focuses on second-language acquisition, hybrid learning techniques, and learning differences. Her motto is that "Everyone can learn: it is the job of the teacher to find the particular key that unlocks each mind."

In addition to her more than full-time work at Goucher College, Annalisa plays a major role in national events promoting Russian, as well as in outreach to elementary, middle, and high school Russian programs. Since 2007, she has co-organized and hosted the ACTR Olympiada of Spoken Russian semifinals in Maryland for elementary through high school students. This is one of the largest Olympiadas in the country, and one of the most successful at the international level. Dr. Czeczulin’s Russian majors at Goucher serve as judges, an unusual bridge across academic levels and a model of recruitment for other programs. Annalisa is also a core member of the Maryland Bridge to Russian Team, an innovative plan to enhance accessibility to Russian language instruction to all students, K-16, regardless of availability at their local school. Following the success of the Russian model, the program will soon add Arabic, Chinese, and Korean, putting Maryland at the forefront of national initiatives for curricular innovation and accessibility in less commonly taught languages.

In a similar initiative, Annalisa has participated in two STARTALK summer workshops titled “Bridging the Gap through Standards and Technology,” focusing on online materials development. The materials that she created, based on authentic video and aligned to ACTFL standards, serve as a template for materials development in other languages. With her professional expertise, pioneering role in promoting new models of accessibility, and ability to connect and build unusual bridges across academic levels and languages, Annalisa Czeczulin is an ideal candidate for the AATSEEL Award for Excellence in Teaching at the Post-Secondary Level.