“…Hunting brings us close to nature: only the hunter sees her at all times of the day and night, in all her beauty, in all her horror,” wrote Ivan Turgenev in his 1852 letter to the editors of “Sovremennik”, reflecting on Sergei Aksakov’s writing. It is this fascination with the natural world that informs not only Turgenev’s mesmerizing descriptions of sights and sounds of Russian landscapes, but also his poignant reflections on nature’s indifference towards human fate. Thomas Hodge’s monograph Hunting Nature: Ivan Turgenev and the Organic World offers an innovative view of Ivan Turgenev’s art and artistic philosophy through the lens of ecocriticism by exploring the biographical and aesthetic contexts of hunting, and nature more broadly, in Turgenev’s legacy. The book chronicles Turgenev’s changing attitude to hunting as reflected in his prose, poetry, correspondence, diary entries, and other documents. Richly illustrated with nineteenth-century paintings, journal illustrations, nature drawings, the monograph offers a broader view of hunting as a socio-cultural phenomenon, and as an important element of Turgenev’s artistic “self.” Hunter or writer, predator or prey, gun or lyre? In his analysis of Turgenev’s artistic biography, Hodge presents these binaries as parts of a complex whole, at the crux of which is Turgenev’s fascination with nature, and the awe it inspires in humans. The appendix to the book makes available materials on Turgenev and Aksakov which were previously unavailable in English. Beautifully written and filled with equal awe for the natural world, this book is a welcome addition not only to scholarship on Turgenev’s heritage, but also contributes to the study of Russian culture and the intellectual history of the 19th century more broadly. 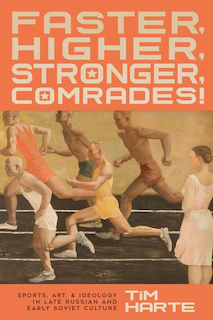 Russia was somewhat late to embrace the modern concept of sports, but when it did, it got off to a running start. As Tim Harte explains in his outstanding book, Faster, Higher, Stronger, Comrades! Sports, Art & Ideology in Late Russian and Early Soviet Culture, it was only in the twentieth century that sports became something more than a pastime for the wealthy. When it did, it quickly acquired a slew of meanings and interpretations. The early Soviet enthusiasm for physical culture as a tool for the creation of the “new Soviet person” is well known, as is the Stalinist deployment of athletic bodies in visual propaganda. It is a hallmark of Harte’s study that he never presents sports as only a vehicle for ideology. In pre- and early-Soviet Russia, sports are inextricably linked both to the project of modernity and the aesthetics of modernism. The sudden popularity of wrestling in late Imperial Russia is reflected in the unlikeliest of places, notably the Symbolist poetry of Aleksandr Blok. The Russian Revolution certainly intensified the artistic interest in sports, but it did not represent a complete break from the culture that preceded it. The Futurist infatuation with the machine-like beauty of the human body at work and play would be taken up by the writers and filmmakers of the 1920s. Harte explores the role of sports photography as “one of the few ideologically safe venues to Left artists” in the 1930s, and the conventions of competitive sports in the writings of Yuri Olesha and the paintings of Aleksandr Deneyka. Harte demonstrates that the preoccupation with sports was both Soviet and more than Soviet, ending his book with a brief analysis of the important role played by sports in the Russian works of Vladimir Nabokov. Sports tries to offer something for everybody, a goal that Harte’s own book handily achieves. 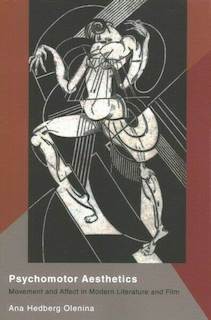 At the turn of the century, the boundaries between the sciences and the arts were not as clearly delineated as today, especially in instances involving the human mind and body. Convincingly, Ana Hedberg Olenina interrogates the influence of the natural and human sciences on futurist poets, avant-garde filmmakers and formalist critics. Psychomotor Aesthetics: Movement and Affect in Modern Literature and Film scrupulously explores the fluidity of American, European and Russian scientific techniques for detecting and interpreting “expressive” body movements, which in turn found articulation in Russian cultural production. Readers will be interested in Olenina’s exploration of Viktor Shklovsky’s response to futurist poets’ verbal experiments; Formalist descriptions of the articulatory properties of various poetic styles; Lev Kuleshov’s indebtedness to reflexology; Sergei Eisenstein’s theory of kinesthetic empathy, evoked through shot composition, editing, and other formal devices; the measurement of filmgoers’ emotional response for the purposes of political propaganda. In this way, the scientific ideas of, among others, Wilhelm Wundt, Vladimir Bekhterev and William Moulton are shown to have a lasting impact on Russian modernity. In so doing, Olenina also addresses the way in which science is sometimes itself compromised by the technological, social and political realities of a time and place. Therefore, the arts and sciences are offered by Olenina as creative experiments and expressions suggesting that the interaction of the two, even today, are necessary for the transformation of knowledge. 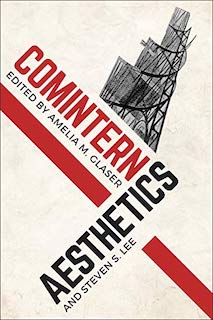 The committee unanimously named Comintern Aesthetics, eds. Amelia M. Glaser & Steven S. Lee, the winner of the 2021 award for best scholarly collection. The broad purview of the volume, in tandem with the meticulous scholarship evidenced on the micro-level, ideally complements the book’s admirable fulfillment of the three criteria that the committee established some time ago:
(1) Framing: do/es the editor/s provide a cogent conceptual framing for the volume that highlights its original contribution to the field and connects the individual chapters;
(2) Framework: are the contributions arranged in sections that reflect the conceptual framing offered in the introduction and in an order that makes sense (i.e., that connects the individual contributions to one another and to the conceptualization of the volume as a whole);
(3) Quality of the individual contributions; are the individual chapters of consistently high quality in terms of (a) the relevance and originality of the argument; (b) the rigor and originality of the research; and (c) the clarity and effectiveness of the writing/exposition. 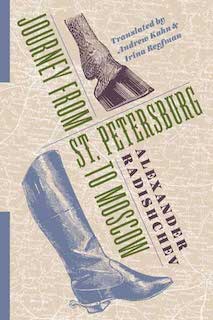 When Alexander Radishchev self-published his Journey from St. Petersburg to Moscow in March of 1790, he soon found himself in the prison of the Peter Paul Fortress, with a death sentence that was commuted to exile in Siberia. The French Revolution led Catherine the Great to ban the book and accuse him of fomenting revolution. Radishchev’s name remained taboo until Alexander II came to the throne. A few remaining copies of the book and manuscripts continued to circulate, until the book was finally first published in Russia in 1907. Radishchev had imagined a different reception for his advice to Catherine – a treatise in praise of freedom, equality and reforms, and opposed to serfdom and a corrupt monarchy. This translation comes at a time when its message seems fresh and necessary again.

It is only the second translation, and the first to take Radishchev’s language seriously, as part of his artistry, rather than a defect. In Journey, Radishchev varies his language from easily readable vernacular to dense passages that are barely comprehensible to native speakers. Here Radishchev uses an artificially archaic Church-Slavonic idiom, with ornate syntax and neologisms that increase the moral weight of important passages and force the reader to pay attention. The translators opted to translate the difficulties Radishchev’s Russian poses into mostly readable, accessible English, with occasional bumps. Radishchev also included excerpts from his long ode, Liberty, which they translate into appropriate meter and rhyme. The translators provide an expert introduction that ranges widely, yet is a thorough overview of the context for such a problematic major work. This seems to be among those translations where the translation clarifies the original and is useful to all readers – scholars, teachers, students, and general readers. The Journey deserves to be much more widely read in English. This is the translation to introduce new readers to this historically important, timely plea to let the blinders fall from our eyes, transform our world and live up to our ideals 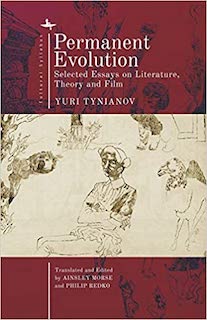 The excitement of the Russian Formalists comes alive in this collection of sixteen essays by Yuri Tynianov (1894-1943). Most of these essays have not been translated until now, and this is the first collection of Tynianov’s essays to appear in English. Tynianov is known for his two most anthologized essays, “Literary Fact” (1924) and “On Literary Evolution” (1927). The translators divide their selection into four sections, beginning with his literary analyses of nineteenth-century literature. These are among his densest writings, with many ideas quickly sketched. A section on contemporary writers, especially Velimir Khlebnikov, is followed by his writing on film. The volume concludes with three essays and a manifesto by Tynianov and Jakobson to revive formalism. Instead, this manifesto signaled the end of formalism, as the political winds against them increased. Together, these essays not only trace Tynianov’s oeuvre, but the course of formalism in the 1920s. The translators provide three appendices – for names, terminology, and a biographical note. The concepts are especially handy, with references to the essays where they can be found. The translators consistently navigate the considerable challenges of Tynianov’s essays – including many dense passages, technical terms, and quotations from literature in Russian and other languages – in clear English that never sounds translated.
This collection has everything one could wish for in a volume, and more. It is an accessible and thorough introduction to Tynianov, who is less well known than the two other members of The Society for the Study of Poetic Language, or OPOYAZ: Boris Eikhenbaum (1886-1959) and Viktor Shklovsky (1893-1984), who both outlived Tynianov. But the volume also succeeds in reigniting the excitement and polemics of Formalism. In an impressive introduction, Daria Khitrova argues that it is time to reevaluate Tynianov and Formalism. All the parts of this volume work together to provide a superb introduction to Tynianov and to Formalism for students and teachers alike in literature and film.