In addition to regular conference panels and events, the AATSEEL conference program includes panel streams. The streams promote greater cohesion among conference panels and foster a broader dialogue throughout the conference. The result is a series of mini-conferences within the framework of our larger conference. There will be two stream sessions (“A” and “B”). The panels in each session will meet simultaneously, so members may apply for no more than one “A” stream and one “B” stream. All conference attendees are welcome to attend stream panels, but participants in a stream are expected to attend all of the panels in their stream.

If you wish to participate in any of the stream topics for 2021, listed below, send your proposal to Head of the Stream division, Dr. Meghan Murphy-Lee murphyle@uwm.edu, following the Proposal Guidelines for individual papers.

“It is worse, much worse, than you think.” So writes David Wallace-Wells in his account of climate change, The Uninhabitable Earth: A Story of the Future. In a little over 300 pages, he chronicles the broad, devastating effects of global warming and the cascading series of calamities that will follow, demonstrating along the way how no one lives “outside” of nature. So where does the field of Slavic Studies fit into the picture?

This stream will address a range of topics in our research, teaching, and professional practice related to environmental sustainability. We wish to cover these three shared facets of our field as a means to highlight their interrelated character, as well as to underscore how we might address the growing climate crisis in a number of venues. Potential topics for contributions include: environmental sustainability in the classroom and on the syllabus across disciplines (e.g., how to incorporate it into language study or how to design courses on or featuring environmental issues in literature, art, history, and beyond); options for assessing our own work, institutions, and organizations in terms of climate impact; research in environmental humanities, across verbal and visual media formats; histories/historiographies of the natural environment (Imperial, Soviet, post-Soviet); and related trends in the field as envisioned by the stream participants.

As Wallace-Wells suggests, “climate’s kaleidoscope” can lead us to be “mesmerized by the threat directly in front of us without ever perceiving it clearly.” Our stream seeks to enable such clarity, and to foster both reflection and action as we consider our place in this rapidly changing world. What impacts, both positive and negative, do we have upon climate as scholars, teachers, and AATSEEL members?

For decades, the fields of second/foreign language pedagogy and second language acquisition (SLA) have developed in relative disregard of one another (R. Ellis, 2010; Lantolf & Poehner, 2014). This curious - and unproductive - schism has begun to mend in the recent decade, as prominent voices in both fields have begun to call for greater integration and the recognition of common goals. This panel is conceived to bridge the gap between the gap between SLA research and the SEE language pedagogy. The stream is organized in three panels, with each focusing on an aspect of the language teaching/learning process. Panel 1 will showcase research focused on the socio-affective variables of teaching/learning, such as grit, motivation and attitudes of both teachers and learners. Panel 2 will be devoted to research on learner language such as learner corpora and experimental studies of specific linguistic features. Finally, Panel 3 will focus on classroom-based research and on research of specific pedagogical approaches. 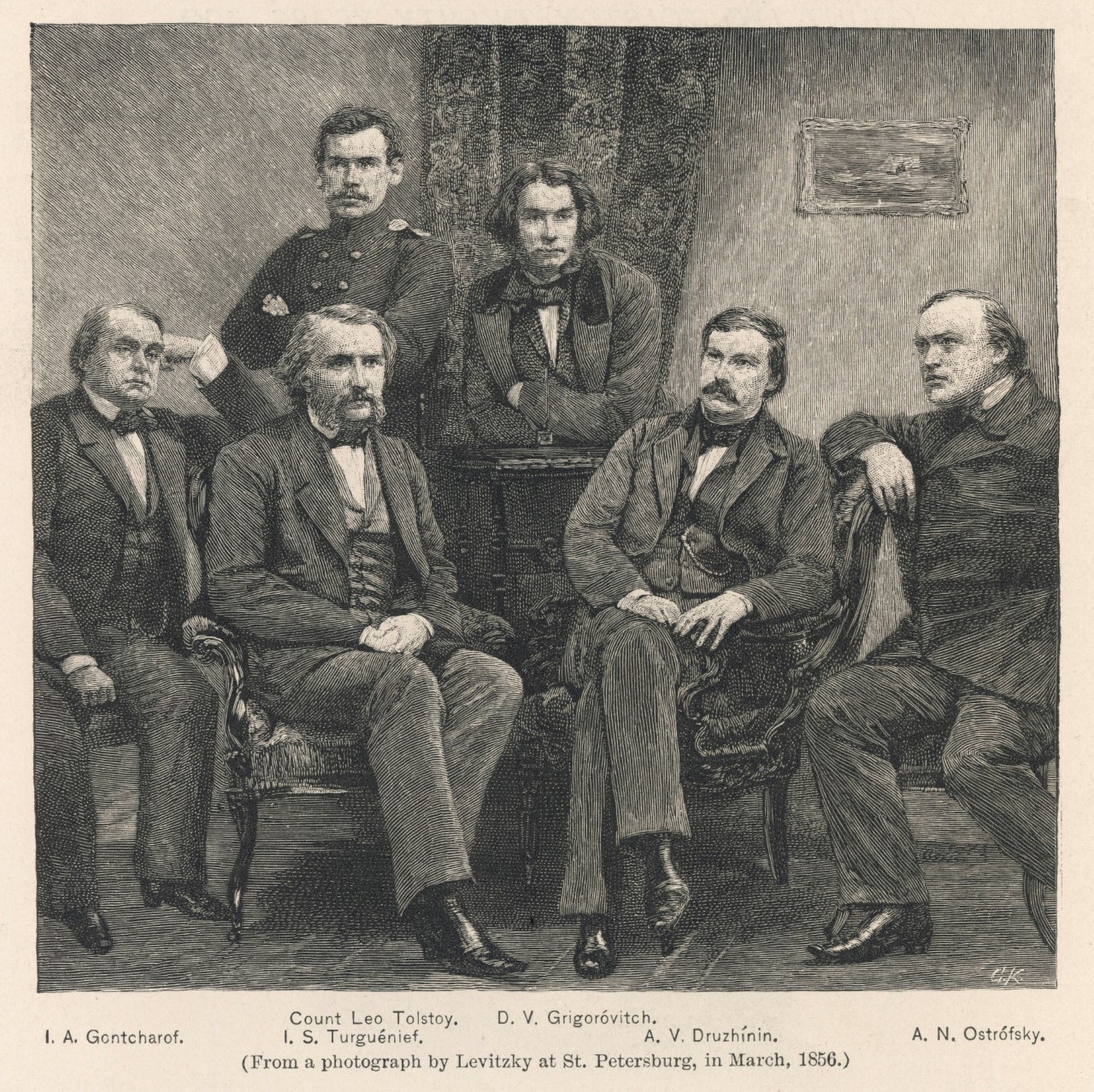 This stream considers one of the most famous photographs in Russian literary history, the 1856 studio portrait of Druzhinin, Goncharov, Grigorovich, Ostrovsky, Tolstoi, and Turgenev as contributors to Sovremennik. The picture documents a period of relative peace between the journal’s leading authors and critics—one that would not survive the changing ideological positions that were at that time already beginning to emerge. What did the journal look like on the eve of this transformation—before its trio of critics became the faces of the journal and transformed its politics? Panelists are invited to approach this topic from the broadest range of perspectives: from analysis of the photograph itself, to the vicissitudes of the literary circle it represents, and the surrounding context during the first years of Alexander II and his promise of reforms. We encourage close attention to this iconic journal itself—its content, both original and translated, its contributors, whether famous or forgotten, and its materiality. Attention may also be paid to the role of this journal and others in the development of Russian intellectual, political, and cultural history.

We are organizing the stream on Teaching Culture through Language with the focus on a proficiency-based and student-centered approach.

We would welcome two to three roundtables with examples of how to teach the topics connected with:

The idea is to share successful examples of your in-class work and lesson plans, including but not limited to flipped classrooms, project-based language learning, fully on-line courses with synchronous and asynchronous hours, field trips and others. Special attention could be paid to the assessment tools and evaluation criteria.

ACTFL put culture among one of the five Cs of World-Readiness Standards for Language Learning, crucial for modern day foreign language learners and their readiness for career and acquiring 21st century skills. How do we teach culture to the Generation Z students? Recent study published by the Chronicle of Higher Education, "The New Generation of Students. How colleges can recruit, teach, and serve Gen Z" (2018), found out that when describing an ideal educator, today’s students put as their least admired the following two qualities: ‘instructor who teaches me about important global issues’ and ‘instructor who has a global view of the world’. How do we incorporate culture into a foreign language curriculum and make it relevant to the Gen Z’s future plans and goals?

Women and Gender in Slavic and Eurasian Studies
Organizers: Association for Women in Slavic Studies (AWSS)

The Association for Women in Slavic Studies (AWSS) would like to organize a stream on women and gender in Slavic and Eurasian Studies. This stream of panels will focus on questions of women and gender in literature and film, digital and popular culture, as well as in contemporary political debates. In addition, we hope to build on some of the productive discussions from last year’s AWSS-sponsored panels, which focused on

We welcome papers that engage with these themes on a variety of levels; as examples, we hope to invite presentations focusing on creative works by women or LGBTQIA artists, works that feature diverse representations of gender and/or sexuality, the role of gender in public discourse in Russia, Central and Eastern Europe, and Eurasia, and representations of masculinity and femininity in visual culture.

The estate (soslovie) designations of noble, merchant, clergy, and peasant that solidified as a means of administrating the Russian population in the early eighteenth century became increasingly inadequate by the mid-nineteenth century, especially following the emancipation of the serfs. Noble properties fell into decline, peasants moved to cities, and sons of priests left the clergy. This stream seeks to confront the literary-historical problems that appear as estates dissolve: What are the effects of new social designations and how does literature both instill and disrupt them? How does literature contribute to efforts to stabilize estate categories or make visible the messier realities behind them? We invite papers that consider these questions in relation to narrative technique, form, and genre, as well as work dedicated to the social history of the period, and encourage efforts to expand the archive by engaging works from outside the canon. Possible themes include: labor theory and conceptions of work; the class dynamics internal to literature as an institution; the gendered aspects of social identity, social mobility, and work; political ideologies such as liberalism, populism, and Marxism as they are attached to notions of class and estate; the emergence of professions as a form of social identity (professors, students, doctors, writers). Panels and papers will be organized so as to facilitate focused discussions of specific aspects of the broader problematic: papers may be organized chronologically, or around specific estates or classes.